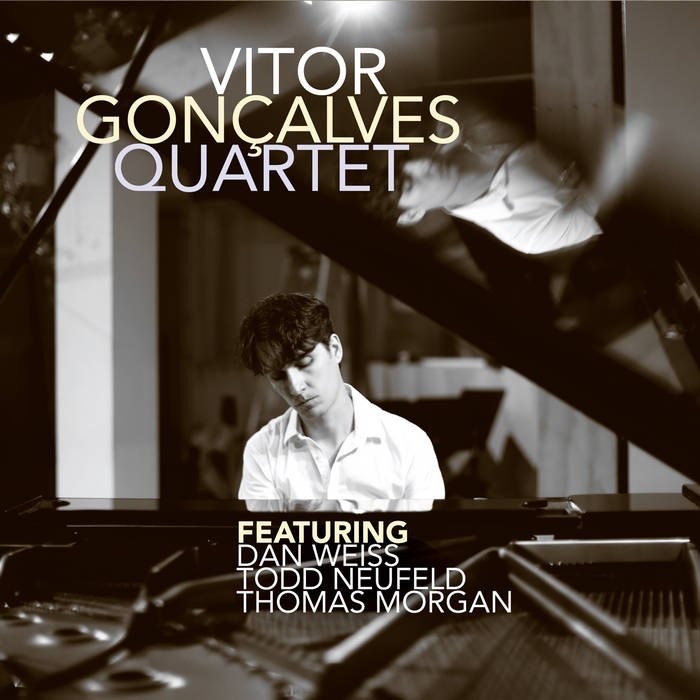 One of the truly wonderful aspects of living in a metropolis like New York City is the diversity that is built in. The mingling of cultures and ideas has made the City an important destination for open-minded and searching individuals. Hailing from Brazil, pianist/composer Vitor Gonçalves came to be a part of the bustling scene and has ended up bringing a vital new voice to the fore. His debut recording Vitor Gonçalves Quartet provides a great example of his mature voice in the blending of Brazilian music with progressive jazz.

Born in Minas Gerais and raised in Rio de Janeiro, Gonçalves grew up absorbing the music of Brazil. Like many Brazilians, he began his studies on acoustic guitar and then began to flirt with rock. He discovered the Brazilian songbook while a teenager and began to be absorbed into the worlds of bossa nova, samba, MPB (Brazilian Popular Music), choro, baião, etc. Gonçalves switched to the piano when his father purchased a keyboard for his sister, which was left unclaimed until the budding musician took it over.

An important part of Gonçalves’s development was the nine years he spent in the workshop and ensemble of Itiberê Zwarg, Hermeto Pascoal’s bassist. The intense rehearsal and performance schedule of Zwarg’s workshop was a crash course in what the eccentric legend Pascoal calls universal music. Gonçalves soon created an ensemble performing original work with some fellow disciples, called Bamboo.

It was while with Zwarg that Gonçalves met American guitarist Todd Neufeld, who had come to one of the workshops and with whom Gonçalves traded ideas and contacts. A four-year stint with the famous Brazilian singer Maria Bethânia led Gonçalves on tours throughout the world. During a stop in New York, Neufeld put together a gig for Gonçalves that featured bassist Thomas Morgan and drummer Joey Baron. The experience cemented the pianist’s resolution to move to New York.

Gonçalves moved in the summer of 2012 enrolling in the Jazz Performance program at City College to pursue his Masters. His studies led him to further develop his own compositional style that increasingly became influenced by contemporary classical, avant-garde jazz and free improv, led by experimentations with his friend Neufeld.

Since moving to the States, Gonçalves has added his impressive piano touch to the music of woodwind master Anat Cohen, with whose project “Choro Aventuroso” he has traveled as far as India and has recorded an upcoming album with her tentet. He is also a regular in the ensembles of guitarist Yotam Silberstein and Anthony Wilson. Gonçalves has also performed regularly with Brazilian singer/songwriter Vinicius Cantuaria, an important role model who encouraged the pianist to leave his musical baggage behind and seek collaborations.

While in New York, Gonçalves kept meeting musicians who had deep affinities for Brazilian music but who were not deeply versed in it. He decided to make it a goal to inject elements of his lingua franca into his new projects and composition. For his new recording, Gonçalves assembled an ensemble that would be capable of approaching his hybrid music with vigor and elasticity. The quartet that he enlisted includes guitarist Neufeld along with virtuosic bassist Thomas Morgan and the highly adaptable drummer Dan Weiss.

The recording begins with the pretty ballad “Sem Nome,” which utitilizes harmonies and changes relating to popular Brazilian music, intriguing rhythmic ideas borrowed from Indian classical music and post-tonal concepts of contemporary classical for the prelude and postlude. “Cortelyou Road” is a fascinating piece that blends rhythmic and harmonic innovations with melodic elements borrowed from the music of Hermeto Pascoal and northeastern Brazil. On “Samba Do Perdão” Gonçalves reinterprets Baden Powell’s beautiful song in a new context of changing meters and harmonies. “Desleixada” is a contrafact of Garoto choro “Desvairada”, a strict form in 3/4 time that Gonçalves adapts by subdividing parts into 9/8.

Named for Gonçalves’s impression of a wintry scene, the winding “Winter Landscape” uses an intricate rhythmic pattern split between 11/8 and 12/8 along with freely improvised sections. Gonçalves discovered Antonio Carlos Jobim’s obscure “Se É Por Falta De Adeus” while trying to enrich his own knowledge of Brazilian song repertoire; this version is played poignantly. Over the past three years, Gonçalves has been involved in the California Brazil Camp located in Cazadero, California, where he has met many important figures in Brazilian art and music. One such individual was Maestro Spok, who leads an incredible frevo ensemble in Recife, Brazil and comissioned Gonçalves to write “De Cazadero ao Recife,” an incredible, upbeat tune that pushes the boundary of the frevo style while remaining connected with that tradition. The recording concludes with the beautiful ballad “The Touch Of Your Hand,” a solo tribute to his wife and farewell kiss to the listeners.

Vitor Gonçalves has done much to expand his musical worldview. His move to New York from Brazil has given listeners a new voice in contemporary Brazilian music and fresh sounds in the world of jazz.

Bandcamp Daily  your guide to the world of Bandcamp

Featured sounds from Fly Lo and Ahmed Idris, plus Mother Nature hops on to drop off new project